The Monkey Puzzle, a prehistoric tower of a tree, stood at the laneway entrance to my grandmother’s farm. As a child I often tried to spot the monkey that must be hiding there and never thought to climb those green-black branches, scratching the sky.

Half a century later, I have questions for my mother.

Why was a Monkey Puzzle, a native of the Andean mountains, in her front garden in Drumagarner? Why was this-must-have garden accessory there alone? Not one like it for miles around. And who chopped it down and what happened to the wood?

I don’t know she says though I do remember the wall … my father whitewashing the wall.

He took great pride she says, in the wall that ran alongside the laneway. She remembers him often in early Summer, whitewashing the wall. Standing back to admire the wall, with its black tar footing. Ready for the men marching in Orange. And she’s not sure she says, if it was for the men who marched in July, or the ones who marched in August.

He was a good businessman she says

Rosa O’Kane is an emerging poet who was born and grew up in Northern Ireland. Her poem ‘Hydrography of the Heart’ was a commended entry in The Hippocrates Prize 2014. She has been shortlisted for the ACU poetry prize in 2018 and 2019. Her poems have been published in Axon Journal, Not Very Quiet online journal, Blue Nib and The Canberra Times. Rosa now lives and works in Canberra. 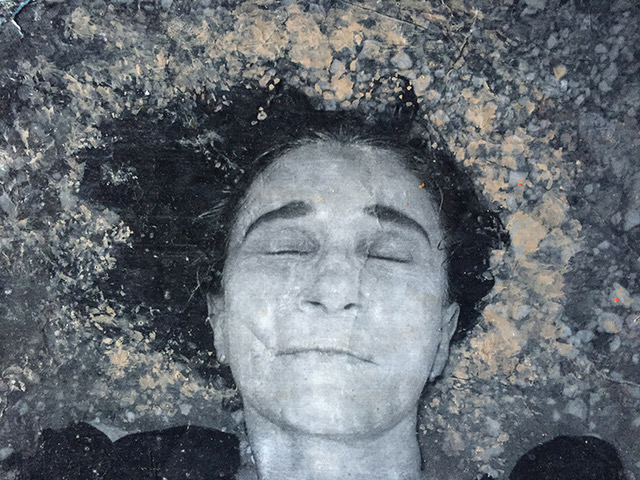 'Whatevahappentu Wiimpatji Noongu (Barkindji Woman)' by Teena McCarthy. A descendant of the Stolen Generations, this piece is a self-portrait of the artist lying on her ancestral riverbed. McCarthy says: 'When I go home to my grandmother’s country of Broken Hill, NSW, I lay in the River Darling. I imagine the water running over me - for we, the Barkindji, we are the river, and the water is our blood'.